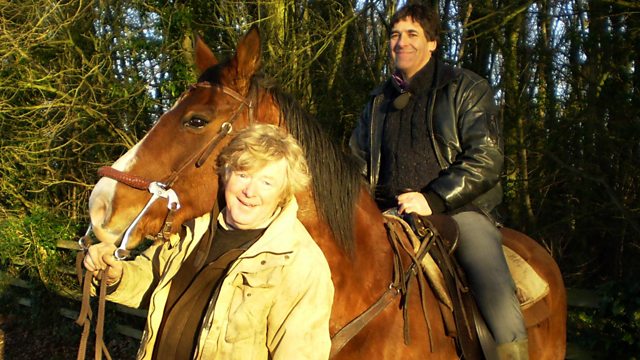 Mark Steel’s review of reporters’ journeys round Britain, starting with William Cobbett, the great English journalist and radical campaigner who was born 250 years ago. Mark talks to veteran horseman Dylan Winter and analyses a classic radio and TV genre that owes more than it realises to Cobbett – the tradition of going out and taking a look at Britain.

The formula is a simple one: a hired hack goes on a whistle-stop tour of a part of the country that’s unfamiliar to him (it’s usually a him) and then publishes his ill-informed impressions together with any wild generalisations he cares to base upon them.

In print, it starts with Cobbett’s ‘Rural Rides’ and ends with the likes of Bill Bryson, Beryl Bainbridge and of course Mark Steel, taking in along the way such scribblers as James Boswell, J.B.Priestley and George Orwell. In radio it’s Tom Vernon (‘Fat Man on a Bicycle’), Ray Gosling, the many incarnations of ‘Down Your Way’… and Mark Steel (again). In TV it runs from Alan Whicker to Clare Balding and Griff Rhys Jones.
When it’s done well, Cobbettry can celebrate the differences between us. It can give us an insight into people and places we might be interested to know more about; it can illuminate the human condition by shining a light on particular examples.

When it’s done badly – as it often is – Cobbettry can be feeble, patronising and full of cliches. In his own prejudiced and over-simplified whistle-stop tour, Mark Steel demonstrates that Cobbett’s legacy has been a mixed blessing.